How to migrate approved software updates from WSUS to ConfigMgr 2012

While being in the process of migrating Windows Software Update Services 3.x to Configuration Manager 2012 you have only one really supported solution, namely adding all approved software updates to Software Update Group manually. This is a lot of work when being in an environment that was operational for years and years with lots of products and approved updates. Just adding all updates isn’t an option either since all approved and declined updates are tested throughout the years. When looking on the Internet for a workaround I came across this workaround for Configuration Manager 2007.

Again, below is based on the workaround for Configuration Manager 2007, so many thanks to DT.

The first step is exporting all of the ArticleID’s of the approved updates from the WSUS database, this is done by executing a query against the database. If you installed the SUSDB on a full SQL version you should easily able to do this, if you are using the Windows Internal Database (WID) you need to use a commandline tool called OSQL.

Connecting to the WID can be done as follows:

After being connected to the WID, we need to connect to the database, execute the following commands, the -o parameter will export all results to the defined file:

Run the SQL queries with the OSQL tool

Now that we have a list of ArticleID’s we need to clean up all rubbish and lines with Null or six zeros. Next we need to create a CSV file of this list so that we are able to use the CSV format in a SQL query in the VBScript as explained here. Below you see the codesnipped you need to change in red, see for the complete script the blog explaining the process. 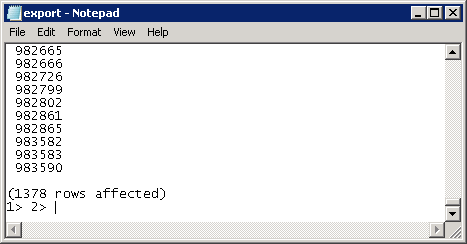 Paste the CSV formatted list of articleID’s in this query and execute the VB Script and be sure to save the output to a file that we need to use with the new PowerShell script. Running the VB script like shown below will result in a list of Software Update ID’s which we are able to use when we want to add updates to s Software Update Group with the native Configuration Manager 2012 R2 PowerShell cmdlets.

The PowerShell script can be downloaded here and works as follows:

After the Software Update Groups are created you are able to clean them up by removing the membeship of updates that you do not want to install anymore.

How to use it:

In the PowerShell Script you need to set a couple of parameters and you are good to go. Place the approved.txt file in the same folder as the script.

Tested in the following scenarios:

This script is tested in the following environments:

Please let me know what you think!

###Update: Just released the blog and script and I find another solution in the Gallery from Saud Al-Mishari which you can find here: