MDT support for Configuration Manager 2012 is there! 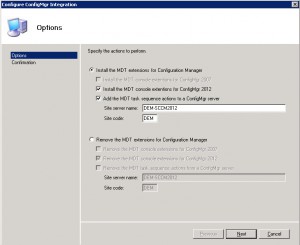 The first look at the integration shows us the options in the Ribbon when browsing to Operaring Systems > Boot Images and Operating Systems > Task Sequences in the Software Library.

Creating new Boot Images is done via the Create Boot Image using MDT in the ribbon.

Must be something cosmetic. (update)And it is cosmetic, now found out that when grabbing the screenshot I had selected a folder called “Windows 7”. When I select another folder under Task Sequences the text will change to the name of the folder.

The creation of all the MDT Task Sequence related packages are working great. Let’s hope that the beta2 version of MDT 2012 will support the creation of new applications instead of packages.

It’s beta1 so an early version and there is still alot of work to do, let’s see what I found just testing a bit of the integration with Configuration Manager: 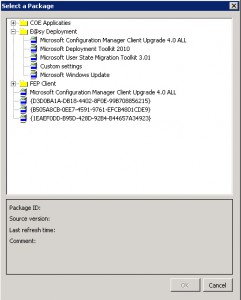 The first look at the integration is very positive, a nice step forward and good that the MDT team is also preparing for the 2012 wave of product releases 🙂 Next time I will look at the Workbench, does it also have a ribbon? I know the answer already, try and test it yourself or just wait until the next Configuration Manager 2012 & MDT blogs comes online.